The Ear and Hearing

Here are some explanations for some of the technical phrases that are used to describe the ear and hearing loss: 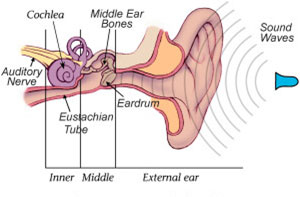 Outer ear: This is the visible part of the ear, and also includes the ear canal and the eardrum.

Middle ear: This is an air filled space behind the eardrum containing small middle ear bones called ossicles. The Eustachian tube connects this part of the ear to the throat.

Inner ear: This includes the cochlea which contains thousands of tiny hair-like cells which are sensitive to sound. It looks like a small snail's shell, about the size of the nail on your little finger. Sounds pass from the cochlea to the brain along the Auditory (or Hearing) Nerve.

What can cause a hearing loss?

Anything which prevents or reduces the sound signal before it reaches the brain causes some degree of hearing loss. Hearing losses can be mild (misses quiet sounds), moderate (difficulty with hearing speech especially in background noise), severe (cannot hear speech at all without hearing aids) or profound (little or no useable hearing). We describe types of hearing losses as:

Conductive hearing loss: this may occur if there is a problem in the outer or middle ear. It may result in a permanent or temporary loss which is generally mild or moderate.

Mixed hearing loss: this is when sensorineural and conductive hearing losses occur together. 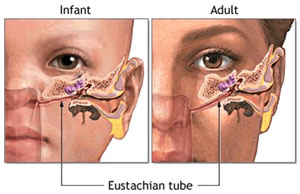 This is the most common cause of temporary hearing loss in children. It is a conductive hearing loss caused by the build-up of fluid in the middle part of the ear that is normally filled with air. The fluid collects and remains in this space if the Eustachian Tube, which joins the middle ear to the back of the throat, does not work very well.

This is more likely in children as the tube is narrower and lies more horizontally than it does for an adult. The fluid makes it more difficult for the ear-drum to move and therefore makes it harder for the sounds to be transmitted to the cochlea.

A child with glue ear can often find that their hearing loss fluctuates so that it changes from day to day or over a longer period of time and usually it clears up altogether by itself after a few weeks.